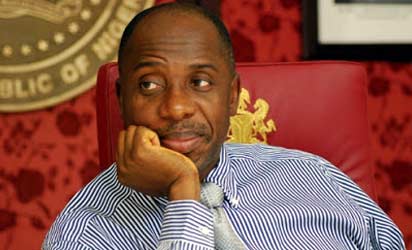 The Inspector General of Police, Mr. Mohammed Abubakar investigation panel into the River State House of Assembly crisis led by Deputy Inspector-General of Police in-charge of Operations, Philemon Leha, has quizzed Governor Rotimi Amaechi on the lingering political fracas in the state.

The panel was said to have visited the governor last week in his office to get his own account of what transpired.

Information Nigeria reports that due to his constitutional immunity, the governor could not be summoned like any other citizen hence the visit to his office for the ‘interview’.

A top police source, who was privy to the meeting, disclosed that Governor Amaechi met members of the panel in camera just as he answered some of the questions put to him.

“The panel has interrogated a whole lot of people in Port Harcourt and even Amaechi has had an audience with the panel.

“The panel visited Amaechi and he spoke to them. They did that as part of their own investigation; he was asked some questions and he answered them, he met them in camera when the DIG (Leha) was in Port Harcourt,” the source stated.

It was gathered that the investigating team was able get useful information during its interaction with the governor, who was said to have opened up to the panel members.