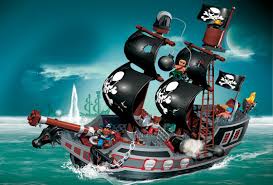 When Tony Miller envisioned marrying his fiance Kaela Schenk aboard a pirate ship, the lack of available seaworthy vessels was a mere technicality for the Rockton, Ill. man.

Miller is now building a handmade pirate ship in his yard — complete with handmade boulders and a man-made pond — hoping to finish the job before his and Schenk’s wedding planned for August 3.

“I didn’t know anything about ships but i studied them a lot and it was fun to do hobby of mine in the winter,” Miller told MyStateline.com “It’s a cross from all my favorite ships…It’s a cross from a galleon to a frigate to a Spanish Galleon.”

The bride-to-be told ABC Chicago she always wanted to be married outside, but admitted Miller’s efforts were beyond what she ever expected.

County officials, however, aren’t entirely on board with Miller’s labor of love. Miller apparently failed to secure the proper permits before embarking on his ship-building plan, but according to CNN, officials are willing to work with the groom-to-be so that he can get his make his early August deadline.