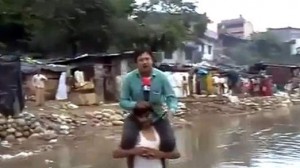 A TV journalist in India has been sacked after delivering his report on floods in the north of the country while sitting on the shoulders of a man who had lost everything.

It said what he had done was “not just inhuman, but was also against the culture” of the channel.

“You cannot ride on someone’s back for a story. We terminated him on Tuesday,” the head of News Express said later.

While the video was not broadcast by the TV station, it was anonymously uploaded onto YouTube where it has been viewed thousands of times.

Mr Pargaien insisted the man had been paid and had wanted him to show the damage to his home.

And while the journalist admitted his part in the filming, he was also keen to pass some of the blame onto his cameraman.

He said the cameraman had not done his job properly because the report was only supposed to show him from the chest up. The villager was not meant to have been in shot.

More than 1,000 people are believed to have lost their lives in the heavy flooding in Uttarakhand state.