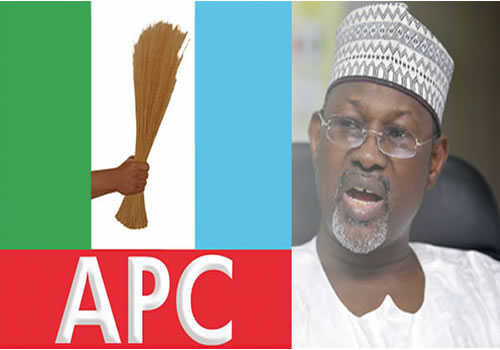 Indications have emerged that the Independent National Electoral Commission (INEC), may advise the three opposition parties trying to merge into the All Progressive Congress (APC) to find an alternative name as a condition for it to be registered.

The move to compel the opposition to adopt another name might not be unconnected with a pending court case regarding the use of the acronym, APC.

This purported line of action has been viewed by the opposition as a plan to frustrate its efforts at getting registered by INEC as the APC should by now have started operating as a party since the 30-day period guaranteed by the Electoral Act 2010 has elapsed without word from the Prof. Attahiru Jega-led commission.

However, Prof. Jega’s spokesman, Mr. Kayode Idowu dismissed the allegation, saying that there was no such plan to frustrate the merger neither is there an existing court order to stop it adding that the commission is guided by the Electoral Act.

The Action Congress of Nigeria (ACN), All Nigeria Peoples Party (ANPP) and Congress for Progressive Change (CPC) – the three major parties promoting the APC – claim that they had met the Constitutional and Electoral Act requirements to merge into the proposed party.

A chieftain of one of the merging parties, who spoke on condition of anonymity, said the merger is deemed to have taken place since INEC did not communicate to the parties 30 days after receiving its letter of intent to merge.

He cited Section 84 (4) of the Electoral Act which states, “On receipt of the request for merger of political parties, the commission shall consider the request; and if the parties have fulfilled the requirements of the constitution and this Act, approve the proposed merger and communicate its decision to the parties concerned before the expiration of thirty (30) days from the date of the receipt of the formal request”, to support his view.

The section 84 (4) adds, “Provided that if the commission fails to communicate its decision within 30 days, the merger shall be deemed to be effective.”

He explained the timeline of events thus: “we are aware that at the meeting (INEC) on Tuesday, some of the commissioners who are card carrying members of the PDP have been putting enormous pressure on the INEC leadership to stop the merger.

“June 10 was the day we submitted it (APC’s letter of intent to merge), so by July 10 they were supposed to have either communicated to us indicating yes or no or automatically we become merged,” he said.

But Mr. Idowu would have none of it as he said that since there was no court order asking the commission not to register the party it could not on its own decide not to do so.

On the purported clandestine meeting where the decision was reached to frustrate the merger plans, he said, “I am not aware of such a decision or the meeting you are talking about.”

On the effective date of APC application for merger, the INEC spokesperson asked “is it proper that we should take the date of application from the day the APC wrote INEC for recognition on merger or on the day they furnished the commission with the necessary documents? I am sure the proper date is the one they submitted the required documents. And with such date in mind, the 30 days stipulated by the electoral act has not expired.

“And even if it does, the law is also very clear that whether we write them or not, the law takes care of any ambiguity”, he explained with an air of finality.