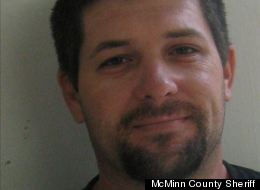 A Tennessee man was shot and killed by his wife less than 15 minutes after he was released from jail.

Robert Vann Marshall, 34, allegedly broke an order of protection Saturday barring him from going anywhere near his wife. Earlier that day, he was thrown in the slammer and given the order because he allegedly threatened to kill his wife and children, WBIR reported.

At 1:27 p.m., he was released from jail. At 1:38 p.m., officers received a call from Marshall’s wife at their McMinn County home, during which she claimed her husband was forcing his way inside the home. Police said he was irate, suicidal and possibly armed.

“His wife called 911 and was telling our dispatchers that he was trying to break into the residence,” McMinn County Sheriff Joe Guy told WRCB. “She retreated into the back bedroom, and at some point fired a shot and he was killed.”

As police descended on the home, Marshall’s wife told dispatchers that she had shot him. The Huffington Post is withholding the woman’s name because she is a possible domestic violence victim.

The woman is currently not facing charges because Guy believes she acted out of self defense. The district attorney will investigate to determine whether the case should go in front of a grand jury.

Guy told reporters that an order of protection is “just a piece of paper,” but said it’s rare that the process ends in more violence.