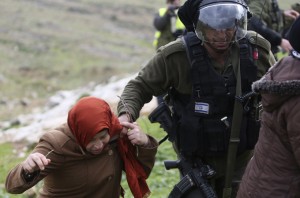 Two female Palestinian activists have gone on trial in an Israeli military court over their involvement in weekly demonstrations against an Israeli settlement in the occupied West Bank.

Rights groups and activists said on Tuesday that the prosecution of Nariman Tamimi and Rana Hamadeh coincided with a rise in Israeli arrests of Palestinian protest organisers in recent weeks.

The decision to put the two women on trial was unusual because charges against them focused on their entry to a “closed military zone” during a protest in the village of Nabi Saleh on June 28, an offence that rarely leads to prosecution in court. It is also rare for Israel to prosecute Palestinian women.

“They have been denied the basic human right to peacefully protest over land illegally seized by Israeli settlers, and the Israeli judiciary has used spurious legal tools to punish them,” the UK-based human rights watchdog said of the women.

Philip Luther, Amnesty International’s Middle East and North Africa Programme director said in a written statement after the arrests that there had been an unrelenting campaign of harassment, “the latest in a litany of human rights violations against Nariman Tamimi, her family, and her fellow villagers”.

“These arbitrary restrictions should be lifted immediately and the charges should be dropped,” Luther said.

Villagers began organising protests every Friday after Israelis from the Halamish settlement took control of a spring between the two communities in 2009, which they say deprived them of a source of irrigation.

The protests typically involve flag-waving and stone-throwing by the Palestinian side, which is met by tear gas, rubber bullets and even live ammunition by the army.

Two Palestinians have been shot dead by soldiers since the protests began, including Nariman’s brother Rushdi in November.

The Israeli army restricted access to the village during the confrontations and declared it a “closed military zone”.

Lerner said the military had taken necessary action to restore security after the violence resulting from the protest threatened the safety of civilians on a nearby road.

Sarit Michaeli of Israeli human rights group B’Tselem said that the trial was expected to last months and it was part of Israeli policies which “make it virtually impossible for Palestinians to legally demonstrate”.

The two defendants are free on bail while the trial continues but Tamimi has been ordered to stay at home every Friday and Hamadeh may not enter Nabi Saleh on Fridays. [AlJazeera]