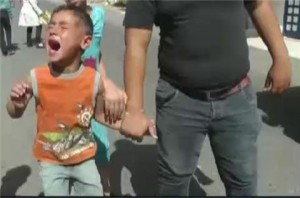 A five-year-old Palestinian boy has been detained by troops for throwing stones which endangered public safety but not been formally arrested, the Israeli army said on Friday.

Rights group B’tselem on Thursday posted video of an incident in the West Bank city of Hebron two days earlier showing Wadia Maswadeh being led crying into a military jeep by soldiers accompanied by a Palestinian adult.

A military statement on Friday said the child was never arrested or charged.

“On Tuesday afternoon a minor was caught in the act of hurling rocks towards a public street in Hebron and, by doing so, endangering passers-by in the area,” it said.

The boy himself admitted that he threw a stone and hit a car by mistake.

“I saw a dog there, there was a small car there. I threw the stone at the dog but hit the car. Those soldiers were there. Then they came and put me in the jeep,” he said.

B’tselem said the troops took the child to his home and told his mother they intended to hand him over to Palestinian police.

When the child’s father Karam arrived home he was advised that he would himself be arrested if he did not bring the child, B’tselem said.

“Wadia and his father were taken to the army base, where they were detained for half an hour. Then the soldiers handcuffed and blindfolded Karam,” the organisation said on its website.

“The footage clearly shows that this was not a mistake made by an individual soldier, but rather conduct that, to our alarm, was considered reasonable by all the military personnel involved, including senior officers,” B’tselem said.

The Israeli military statement said: “Soldiers intervened on the spot and accompanied the minor to his parents.

“From there he was passed on to the care of the Palestinian security forces, all the while accompanied by his parents. The child was not arrested and no charges were filed.”

“It is critical to bear in mind that even rocks thrown by children can pose a lethal threat to people,” it added.

The statement did not accuse Wadia of causing injury or property damage.