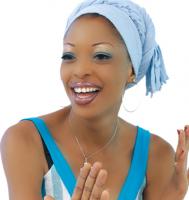 Shade Omoniyi is a Yoruba top actress who hit the limelight some years back. She has acted and produced so many movies and soaps. She is fondly known as Lepa Shandy because of the role she played in one of her movies. The screen diva is humble and down to earth but that did not prevent her from having one scandal or the other. It was said that her first marriage with a London-based dude crashed. In this interview, Shade refused to say anything about it even now that she says she is happily married.

A lot of people know you as Lepa Shandy, a top Yoruba actress, but who exactly are you?

I’m an actress, a wife, a mother and I’m very gentle. I’m very humble and down to earth. I’m just me. It is true that a lot of people know me as Lepa Shandy, meaning that I have the fame. Glory be to God but it is not as if I came in and got the name or fame immediately. I had been in the English speaking industry for some time before I came to Yoruba movie genre. I hit the limelight in the Yoruba movie industry which I got into in 1995. In 2002, I took a role as Lepa Shandy. You won’t believe it, I have done several movies after that but Lepa Shandy still remains the best for my fans.

What are other movies before lepa Shandy?

Before that, I was in movies entitled Breaking Point, Back From Africa, Family Circle, Bolanle Olufayewo, Esemefa and so many others.

You played the role of a gossip in the Family Circle, a soap opera, you played it so well that…

No, I’m not a gossip. I was able to play that role well because I’m an actress. Once you are an actress, you should be very versatile and be able to put in your best in any role you are given. That was what I did and still do.

What is the most challenging role of all?

Besides these challenges, how do you cope with fame? Also, there are some of your colleagues who feel too big to respond to greetings from fans, why is it so?

I cope well. I’m still nice to people. See how I greeted you when you approached me. I try my best to be as humble as possible. Can I tell you the bitter truth about people feeling big? It depends on your upbringing. If you have that kind of upbringing from your home, definitely you would allow fame or stardom to get into your head. But if you come from a decent and humble home, no amount of stardom or fame would get into your head. Upbringing matters a lot.

Speaking about upbringing, how was your childhood?

It was challenging and interesting because my father happened to be a retired army officer. He is a disciplinarian to the core. But honestly, that discipline is what I’m enjoying now. It is what is guiding me not to be arrogant or snobbish.

You said your dad is a disciplinarian, why did he allow you to become an actress?

Is he the fiancé that you are now married to?

But you were married to Mr. Kazim, a London-based dude and your marriage with him reportedly crashed; what led to that?

I don’t want to talk about that. The only thing I can feel free to talk about is to counsel my fellow women whose marriages crashed and who feel it is the end of life. I want to tell them to believe in God and be focused. Whatever comes your way, take it as destiny. Let me cite an example, if you have a car crash, will you say you won’t drive the car because you had a crash? Or will you say you won’t enter a bus because of a crash? It is also the same thing about marriage. Once you have a misfortune somewhere in life, you forge ahead and look forward. What happened may be for you to reach your destiny. Whatever happened, take it that it was destined to be and pray to God to lead you through.

Do you believe that until a lady remarries, that’s when she can get her right husband?

You seem to be serious about this. Are you talking from experience?

I’m very serious with the point I’m making and I’m talking from experience too. But I will tell you, I give glory to God for giving me my own bone.

Is this your second marriage?

I don’t have a second marriage. This is my marriage and I give God the glory. My marriage is working. It is true that some of my colleagues’ marriages have crashed but nobody is perfect. It is only God that holds marriage. So, if you have God in your marriage and it still crashed, then see it as God’s plan because you have tried your best. But I can tell you, nobody is perfect, both the man and the woman. You know it takes two to tango. You need to understand yourselves very well, to be considerate, prayerful and everything would sort itself out. Always remember to put God first in your marriage, and as wife you should do your best to keep your marriage.

Do you bring stardom into home front?

No, my husband is my husband. I don’t bring stardom into my marriage. Once I’m off set and at home, I’m home with him. I still find time to cook for my family. That is one thing I love doing best and I enjoy it so much. I have a housemaid but I don’t allow her to cook my hubby’s meals. Look at my nails, I don’t keep long nails or wear false nails all the time. This allows me to cook without hindrance. I have a young baby to take care of. This doesn’t mean that I won’t be fashionable or do things right once it comes to fashion. I don’t allow anybody, I mean you can underline the word anybody, whosoever it may be, to cook for my husband.

What happens when you are on the set or out of the country?

If I’m not in the country, fortunately for me he knows how to cook. He walks into the kitchen to do that himself.

You had a baby in your 40s, what is motherhood like?

What was that scandalous story about you that made you shed tears?

My most scandalous story did not make me cry but I was deeply hurt. Later, I developed a thick skin. What happened was that they wrote that I was dating the husband of my friend. That story wasn’t true. The lady was my good friend. I was supposed to be her chief bridesmaid but my Oga then wanted me to be fully on the ground. He said I had to be the hostess. That showed how close I was to the husband and wife. All of a sudden, I saw it on a soft sell that I was dating the man. The first thing I did when I saw the story was to call the lady to find out if she had read it. She said yes but that I shouldn’t mind them. I didn’t cry over that but honestly I was almost crying. It was when I hit stardom that some controversial stories were written about me. Honestly, it is not easy to ignore them. But with time, I started developing thick skin. I started telling myself that they were only selling their papers.

What is your motto? And do you have tattoos?

Simplicity is the watchword. Unfortunately, I don’t have. Would that add to my beauty? There are other things that can add to my beauty but not tattoo. I’m not saying that those that have that should lose their self confidence. It is their life but I personally don’t like it. Anything that I would do that I would wake up one day and say ‘I don’t want this anymore’ and would be difficult for me to remove or get rid of, I won’t do it.

Doesn’t your husband frown at what you wear, your skimpy styles and all that? And what fascinated you about him, his money?

No he doesn’t frown at what I wear. He too is trendy. He loves to see me look good.

Far from his money! Those that know me know that I don’t date because of money. What if there is no more money, what happens to the relationship? It is his simplicity and humility that fascinated me.

What did you study?

I studied Computer Science at the University of Lagos and worked in a bank for some time.