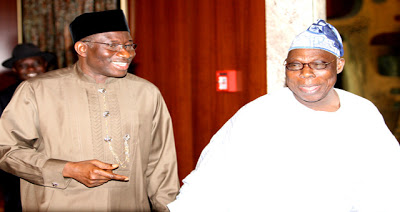 Soon as Mr. Jonathan and his retinue of aides arrived the expansive compound at exactly 11:52am, the gate was immediately shut on other visitors while security was also beefed up outside and along the windy road leading to the ex-president’s hill-top mansion.

Meanwhile, Information Nigeria learnt that some northern governors were already in a closed door meeting with chief Obasanjo when Mr. Jonathan visited.

Reports indicate that President Jonathan was originally slated to visit his Spokesman, Dr. Reuben Abati in Abeokuta to identify with him on Friday’s funeral ceremony of his mother, Madam Maria Taiwo Abati, in which he was represented by his Chief of Staff, Mike Oghiadomhe, but chose instead to see the former president.