President Goodluck Jonathan has restated the opposition of Nigeria and the African Union to the unconstitutional removal of a democratically-elected government. 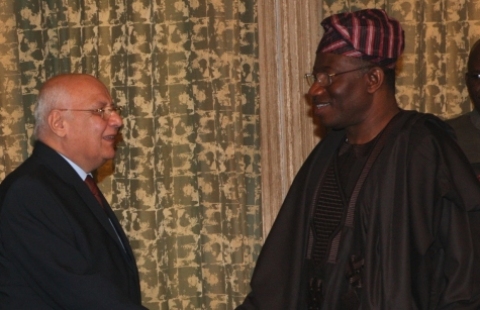 According to a statement by spokesman Reuben Abati, Mr. Jonathan was speaking during a meeting with Ambassador Raouf Saad, Special Envoy of the Interim President of Egypt, Mr. Adly Mansour at the State House, Lagos.

The President was said to have told the special envoy that the Federal Government maintains its stand that only the electorate in any country have the constitutional right to remove an elected leader.

He welcomed the assurance by Ambassador Saad that the Egyptian military were not currently involved in the day-to-day administration of the country, and advised the interim government to do its best to return Egypt to democratic rule as quickly as possible.

Mr. Jonathan told the Special Envoy that Egypt was very important to Africa and that Nigeria and the African Union will give the country the necessary support to ensure that it returns to the path of constitutionalism and political stability as quickly as possible.

The Nigeria leader also condemned recent terrorist activities on Mount Sinai and reaffirmed the Federal Government’s full commitment to working with the rest of the world to combat terrorism, adding that no person or group has the right to intimidate others with acts of terror.

Ambassador Saad was in Lagos to brief President Jonathan on the current situation in Egypt against the background of the opposition of Nigeria and the African Union to the unconstitutional change of government in Egypt and the country’s suspension from the continental body.

The Egyptian envoy praised Nigeria’s leadership role in Africa and sought President Jonathan’s advice on how Egypt could best overcome its current difficulties.