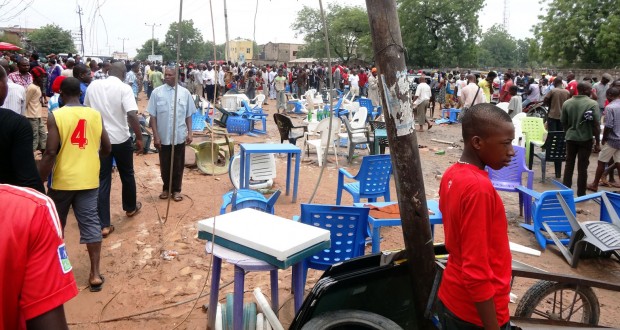 Conflicting figures have emerged over the actual figure of casualties from Monday’s multiple explosions in Kano as both the army and police put theirs at 12, but the Igbo community claimed that the bombings killed 45.

The explosions ripped through Sabon Gari, an area mostly occupied by non-indigenes.

As at the time of writing this report, no group has claimed responsibility for the explosions which bear similar patterns with past attacks by radical Islamist sect, Boko Haram.

It was reported that no fewer than four different explosions were heard around outdoor bars in Sabon Gari, just as unconfirmed reports say the perpetrators pumped hot lead into some survivors before fleeing the scene.

“On Monday, July 29, between 9 and 9:30 pm, terrorists invaded Sabon Gari, an enclave carved out for non-natives, and planted Improvised Explosive Devices (IEDs), which exploded almost simultaneously at Enugu/Igbo Road, near International Hotel; and on New Road, directly opposite the popular Ado Bayero Square—precisely at No. 38, 39, 40 and 41.

“At 41 New Road, the Christ Salvation Pentecostal Church was also bombed at the peak of evening worship. Ohanaeze’s account can confirm 39 deaths in New Road and six in Igbo/Enugu Road; and also unspecified number of people got injured.

“The team of Ohanaeze Ndigbo, Kano State chapter, arrived at the scenes at about 9:30 p.m. and witnessed the movement of bodies and the wounded by security agencies, especially the Army.

“Ohanaeze Ndigbo, however, can recall that this is not the first time terrorists have invaded Sabon Gari, particularly, New Road. In fact, on that same spot where the latest incident happened, several attempts have been made to terrorise Nigerian citizens. As a reputable organisation, we call for adequate security of lives and property in northern Nigeria.

“Ohanaeze Ndigbo also commends the spirited efforts of the Assistant Inspector General of Police David Omojola in-charge of Zone 1, who was accompanied by the Commissioner of Police, Musa Daura, to the scene of the incident for on-the-spot assessment.

“However, without fear of contradiction, Ohanaeze Ndigbo Kano registers its deep feelings over the unprovoked attacks on Sabon Gari, Kano, dominated by Ndigbo.

“At this point, Ohanaeze Ndigbo calls on President Goodluck Ebele Jonathan to make haste and protect the lives of citizens resident in the northern part of the country, particularly, in Kano, with undisputed status of boosting economy and politics in Nigeria.

“To all the departed souls and the wounded in this grievous attack, we register our deep sympathy and only hope that those in authorities, including all security agencies, would brace and take decisive action to end this carnage – man’s inhumanity to man.”