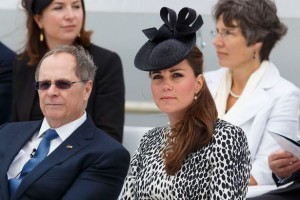 The Duke and Duchess of Cambridge have received an unusual baby gift from the Finnish government – condoms.

The bizarre present features in a box of goodies sent to the expectant parents to congratulate them on their impending arrival – but perhaps encourage them to have a break before planning a second child.

It was presented to William and Kate by the Finnish social security service Kela, obviously keen to get in early before the Duke and Duchess are swamped with gifts.

The Duke and Duchess will also discover bra pads, a picture book and muslin squares to help them cope with the initial few weeks with their first child.

The contents came in a package which is intended to double up as a crib – meaning if Kate and William do opt to use it the third in line to the throne will be put down for naps in a cardboard box.

A Kensington Palace spokesman said: “We were delighted to receive the very kind gift of the maternity package from the Finnish government.

“It was a very thoughtful gesture and we’re very grateful for it. I’m sure the Duke and Duchess will be very interested to see the contents.”

The baby box is given to all expectant mothers in Finland as a starter kit and is credited with keeping infant mortality rates low in the country.

A spokesman for Kela said: “Kela wanted to congratulate the Duke and Duchess of Cambridge.

“The maternity package gained such a positive response from all around the world. The timing was perfect that the royal couple are having a baby.”

Gifts from commercial organisations are not accepted by the royal family, however the palace will receive presents from governments and individuals.

Kate is due to give birth later this month at the private Lindo wing at St Mary’s Hospital in Paddington, the same hospital where William was born 31 years ago.

A change in legislation means the new baby will automatically be third in line to the throne after William and Prince Charles, regardless of whether the couple have a boy or girl.