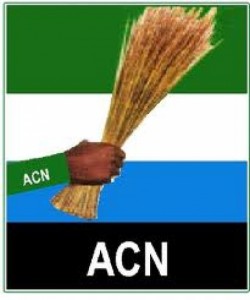 The Lagos State chapter of the Action Congress of Nigeria, ACN, has taken a swipe at those faulting the decision of the Lagos State government to move some homeless, indigent citizens to their home states for rehabilitation.

According to the party, no sane government would be blackmailed into allowing homeless Nigerians continue to inflict security and environmental problems on its state just to please those that readily play lousy and retrogressive politics with issues for their selfish and ulterior motives.

In a release signed by the Lagos State Publicity Secretary of the ACN, Joe Igbokwe, the party said it is particularly irked by the decision of some professional chance takers and political opportunists to take advantage of the recent movement of some indigent, homeless and social miscreants to Onitsha for the purpose of re-connecting with their families when they have no tangible business in Lagos.

The party said there should be an end to opportunistic politics and cheap ethnic and tribal politics as are being played out over the issue. The party said that transporting indigent, homeless miscreants to their home states is not a new idea and not limited to Igbos.

“We expect that the opposition in Lagos and its array of frustrated politicians in Lagos will certainly seek to play politics with the decision of the Lagos State government to move some people that have no tangible business staying in Lagos to their home states. We expected that the professional ethnic agitators who have wasted public offices in Igboland, pillaging resources that would have served the interests of the people are now cashing further from the plights of their vicious approach to governance on this issue.

“We however want to state that it is a shame to the opposition that it is seeking cheap political capital from the plight of the hapless victims of its free loading approach to governance and has drawn the support of ethnic irredentists whose failure on governance left the Igbo people so poor that they have become homeless refugees in Lagos and other parts of the country. It is a huge irony that the PDP, which has purloined the country in fourteen years of vicious corrupt governance, is the one now seeking to make political capital from the plight of its victims and says so much of the dominant politics of deception, corruption and greed which had hallmarked the unfortunate PDP governance of the country since 1999.

“To put the records straight, the Lagos State government, with its commitment to the interests of Lagosians and in its effort to build a functional modern mega city, had long embarked on the decision to pick up the many derelicts, the homeless, beggars and social miscreants that inhabit all parts of Lagos.”
Clean them up, find means of livelihood for those that are employable and send those it cannot manage to their respective states. We are all aware that this scheme has seen the practical reduction in the number of the beggars, street urchins and social miscreants that used to constitute real danger to life in Lagos and has seen such people moved back to various states, mainly in the North.

“We should note also that other states in the South, including South West states have received such people and the Lagos State Government has been careful to ensure that the number of people involved in such periodic movements are minimal and are only people who do not have where to stay in Lagos, who don’t have any real engagement in Lagos and who constitute nuisance to other Lagosians. We also put the nation on notice that before the latest movement of some people to Onitsha, we notified the Anambra State government, which neither responded nor took action on our complaint. We also want the public to note that the Lagos State government was involved in similar deal with the Akwa Ibom State government when some indigent Lagosians were moved back from Akwa Ibom State to Lagos. We want Nigerians to note that such movements are common with nearly all states in Nigeria and is becoming an issue just because selfish politicians and ethnic reapers who were prominent in the despoliation of the country see it as new and worth cashing in on.

“We want to throw a frontal challenge to the PDP and the ethnic chance takers now making undue issue over the present case to let Nigerians know any one of those sent back to their states who has a home, job or business in Lagos. We want them to go further to tell us any of those deported with any fixed address or legitimate means of livelihood. We are peeved that selfish politicians and their ethnic soulmates who have relentlessly pursued the pauperization of Nigerians even in their home states are the ones seeking cheap political ends from the plight of their victims and this is condemnable.

“Lagos ACN wants to let Nigerians know that Igbos constitute over 45 per cent of the population of Lagos and they dominate key sectors of the Lagos economy. Is there any case where any of the millions of Igbo with one legitimate business or the other in Lagos is involved in the recent movement? Igbos find Lagos a safe haven for their legitimate productive activities and the present government has sustained good and cordial efforts to ensure this prevails. We want to state that Lagos hosts the largest population of Igbo in any single state outside Igboland, how is it that the movement of about 60 Igbo miscreants to their home state has now become an issue political and ethnic reapers want to cash in to destroy this priceless relationship?

“We want to warn Ndigbo and Lagosians to beware of the leaven of the PDP and their ethnic collaborators who have spared nothing to deepen poverty and want in Nigeria and always turn round to cash in on the fate of the victims of these deadly politics. We want to assure Ndigbo in Lagos that nothing will be done to hurt and injure their interests and equally let those whose stay in Lagos constitutes threat to others that the Lagos State government will do everything within its rights to protect the lives, interests and well being of the over 20 million Lagosians who are law abiding and find legitimate reasons to stay in Lagos,” the party said.