The Lagos State Government said it would construct a 300-seater bus stop at Obalende area that would make commuters convenient while waiting to board state-owned buses. 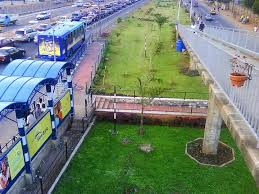 The Commissioner for Works and Infrastructure, Dr Obafemi Hamzat, said this on Sunday while inspecting the project and the Osborne Jetty Terminal, Ikoyi.

Hamzat said that the project would be completed in three months, and that it was part of the Obalende Transformation Initiative of the government.

He explained that the Obalende Bridge would also be expanded into two lanes to cater for heavy traffic volume in the area.

Also speaking, Mr George Ogbemudia, an engineer in the Office of Infrastructure of the Ministry, said the project would be constructed at 10 different bus shelters and designated queuing spots.

Mr Adeola Olatubosun, Project Engineer, Osborne Jetty Terminal, told the commissioner that about 18,000 square metres of land was needed to build a car park that would accommodate 74 cars.

Olatubosun said the ground floor of the terminal, which was almost completed, was for arrival and departure of passengers, adding that it had eateries, toilets and other facilities which were duplicated on the top floor.

“The ground floor of the terminal is for arrival and departure of passengers with ticketing offices, eatery and toilets.

“Mechanical installations are ongoing. Also, the installation of vehicular ramps and the suspended ceilings and mosaic tiles are being put in place.

Olatubosun said that when completed, the jetty would enable residents to ferry their cars to any part of the state.

He said that the project would be completed in October, adding that it would link Ipakodo and Badore jetties in Ikorodu Local Government Area of the state.