The leadership of the Peoples Democratic Party, PDP, has hailed President Goodluck Jonathan for the successful kick-off of the reconstruction and expansion of the Lagos- Ibadan Express Way. 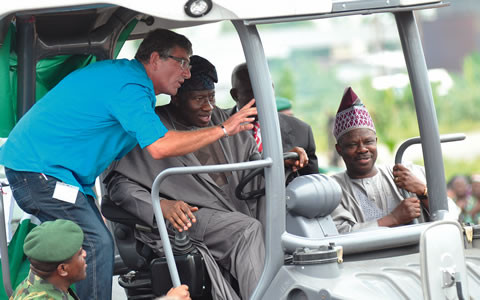 The party also berated the opposition party, Action Congress of Nigeria, ACN, governors in the South West for not attending the launching of the project which it said is capable of transforming the lives of Nigerians and boosting socio-economic activities in the region in particular and the nation at large.

In a statement issued by its Acting National Publicity Secretary, Tony Caesar Okeke, the ruling party however reserved praises for Governor Ibikunle Amosun of Ogun state for personally attending the event and accused the other absent ACN governors of political immaturity.

“The leadership of the Peoples Democratic Party (PDP) commends President Goodluck Jonathan for the successful kick-off of the reconstruction and expansion of the Lagos- Ibadan Expressway which has been in a state of disrepair for many years.

“Indeed this is a testament to the President’s resolve to completely deliver on his promise to revolutionize the road sector in line with his Transformation Agenda to give Nigerians a new lease of life.

“The Lagos-Ibadan Express way is of course one of the busiest and most important roads in the country and the reconstruction and expansion project will not only boost economic and social activities in the South West in particular and the nation at large but put an end to the incessant loss of lives recorded yearly as a result of accidents on account of the bad state of the road”, the statement said.

The PDP said the project also “put the lie” to insinuations of marginalization against the South West by the Jonathan administration noting that the PDP-led government has in the last two years undertaken several other strategic road projects in the region including the repair of the Lagos Third Mainland Bridge, rehabilitation of Benin-Ore-Shagamu highway, rehabilitation and reconstruction of Ijebu-Ajegunle-Araromi-Ife-Sekona Road in Ogun state, reconstruction of Ibadan-Ilorin road among others. This is in addition to so many other infrastructural projects executed in the region.

Lampooning the ACN governors for staying away from the event, the PDP said such was a sign of “partisan parochialism and political immaturity.

The party stated that the project is for the benefit of the people and wondered why the ACN governors did not show full support with their presence.

“We wonder when the ACN governors will jettison such political parochialism. They have been so blinded by partisan politics that they fail to see when to draw the line and show support to a good cause even if such is not being executed by their party.