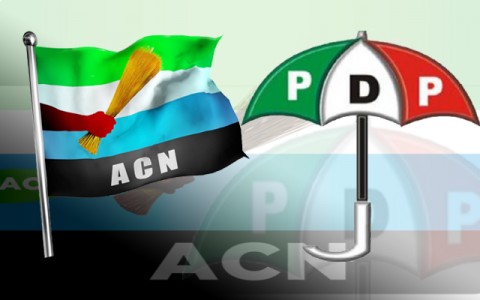 The Lagos State chapter of the Peoples Democratic Party (PDP) has raised alarm over the alleged infiltration of the party by agents of the Action Congress of Nigeria (ACN), with the intention of destabilizing it.

The Lagos PDP also demanded the sacking of the Ishola Filani-led PDP caretaker committee in the South-West.

The party, in a joint letter addressed to President Goodluck Jonathan by the local government chairmen of the party in Lagos, alleged that ACN fifth columnist were behind the call for the removal of Chief Olabode George as member of PDP Board of Trustees (BoT).

Information Nigeria recalls that two chieftains of the PDP, Alhaji Badmus Agboola and Dauda Atomoh, dragged the former Nigeria Ports Authority (NPA) Chairman before a Federal High Court in Lagos to determine whether based on Bode George’s conviction and sentencing, the PDP is not obliged to bar him from functioning as a BoT member.

But in their letter, written by Hon Mufutau Dada Babalola on behalf of the Forum of PDP Local Government Chairmen in the state, copies of which were sent to the National Chairman of the party, Alhaji Bamanga Tukur and the Chairman, BoT, Chief Tony Anenih, the Lagos PDP urged the president and other major stakeholders at the national level to be wary of the antics of the fifth columnists which it alleged, are being funded by ACN.

The letter read: “We are absolutely disgusted with the crude, destructive politics presently playing out now in the South-West. We are using this opportunity to caution the National Leadership of our party about the deliberate attempt of some fifth columnists whose sole motivation and purpose is to cause disunity and disaffection among the rank and file of the People Democratic Party in the South-West.

“The current evil machinations of some not-so-hidden hands to malign and taint the image of our leader, Chief Olabode George, are no doubt part of the grand strategy of the opposition forces as we embark on the epic struggle towards 2015.”

“Let there be no doubt about it: the silly, petty and mischievous demand that Chief Olabode George should be removed from the party BOT is part of the orchestrated agenda of the Action Congress of Nigeria (ACN) to cripple the credible voice of Chief George in the South-West and thereby weaken and decimate the party. That is the long and short of it.

“Now, what is the business of the court with the spirit and practices of a party constitution? What is more, those who sent these mercenaries on this foolish assignment are well aware that their own chairman (name with held) was jailed for four years by a military regime for corrupt enrichment.

And yet not a voice has been raised since the man eventually contested and became a governor. Let them remove the log from their own eyes before pointing accusing fingers at others.

“We reject outright the debased mercenaries in our party who claim to be PDP in daytime but are dining and wining with ACN and practically playing out their script. It is an established fact that Chief George is a selfless, committed and self-sacrificing leader of our party, not only in the South-West but in the whole nation. The challenges he had faced in the past, including the convoluted trial and undeserved incarceration are all products of very disdainful and wicked politics.

‘His imprisonment was orchestrated and sponsored by the ACN clique. The truth is that Chief George remains the strongest bulwark against the ACN domination of the South-West. He is their greatest headache because he cannot be bought or purchased.

“Asking for the removal of Chief George from the BOT of our party, as silly as it is, is part of a despicable design to intimidate those who constitute the formidable and impenetrable core of President Goodluck Jonathan’s loyalists and then eventually sabotage the second term bid of Mr. President.

“Indeed, the current attempt to malign Chief George is a crude, dubious proxy campaign against President Jonathan. Nothing more! So, the rumblings are not really about George. It is a subtle war against the collective effort of all well-meaning leaders to get the party back on a solid footing.

“The offence of Chief George here is his insistence with the collective leadership of the South-West PDP that the Chief Ishola Filani caretaker committee should be disbanded forthwith because it has outlived its usefulness.

“We all know that the Filani caretaker committee was supposed to be there just for 21 days. What is the man still doing there? He is busy manoeuvring to perpetuate himself in office. He is an aberration that must go now!