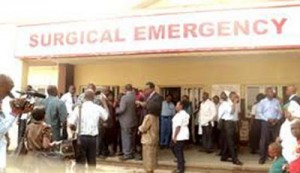 Late Elizabeth Toby-Lade was rushed to LASUTH after she was referred there from a private hospital where she was taken after a careless driver who wanted to make a turn inside her compound, as the gate was open, hit her and two kids who sustained injuries.

Reacting to the media report which quoted the husband of the victim’s claim that the nurses on duty at the Emergency Unit of the hospital refused to place the patient on oxygen, due to shortage of oxygen, the Chief Medical Director of LASUTH, Professor Oke Wale, said the patient upon arrival with a head injury received immediate resuscitation measures.

“LASUTH has never been in lack of oxygen for the use of patients as we generate oxygen in our plant for medical use and we could not have been short of oxygen or ask patients in dire need of it to pay before administration,” Oke said.