A lesbian teenager (on the photo) has been arrested after giving her girlfriend’s 11-year-old cousin a ‘tramp stamp’ and the young girl’s mom only found out after her daughter admitted that she wanted the ‘uneven’ star tattoo. 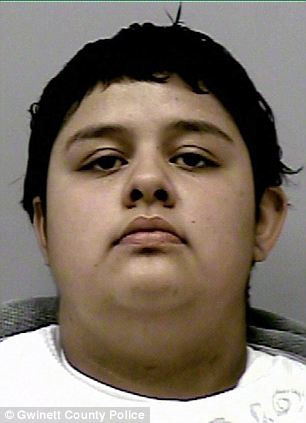 Dayana Maldonado, 19, now faces a misdemeanour charge of tattooing a minor after she admitted to police that she made the girl promise not to tell.

The victim, whose name has not been released because of her age, started crying when her mother questioned her about the tattoo on her lower back that she noticed when helping her daughter get changed.

The mother called local police in Georgia to report the incident, and the police report details the back-and-forth between the girl and Maldonado.

‘She affectionately referred to her tattoo as “a tramp stamp,”‘ the responding officer said of the young girl.

Adding to that, the officer weighed in on the artistic composition- or lack thereof- saying that it was ‘uneven in dimension’ and ‘poorly drawn’.

The local sources report that in spite of the girl’s initial protests that she didn’t want to get anyone in trouble, she eventually revealed that she got the tattoo when she went over to Maldonado’s house on Wind Way Court in Norcross, Georgia.

It is unclear when exactly the incident took place, but the girl went to the Norcross home because her cousin is dating Maldonado, who has three arrests for unidentified charges.

Maldonado told officers that the girl started asking to have a tattoo as well, but she tried to keep her at bay.

Maldonado reportedly has a number of tattoos herself and sold the equipment that she had at her home after she realized that the incident was being investigated.

She was arrested last week and released on $1,300 bond.