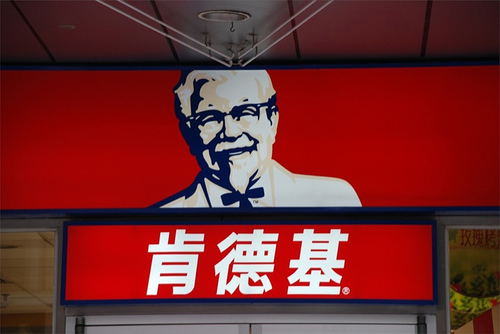 In a recent program, China Central Television said reporters had recently taken ice samples from three fast-food chains and compared them with toilet water. The samples from a branch of KFC in the city’s southern Chongwenmen district were found to have levels of bacteria 12 times higher than the toilet water, and 19 times higher than China’s standards for drinking water.

Ice samples taken from the other two chains also failed to meet national standards, according to CCTV. A branch of local fast-food brand Kongfu was found serving ice with five times as much bacteria as toilet water. Ice from a McDonald’s outlet, meanwhile, turned out to be cleaner than toilet water but still fell short of being drinkable, the broadcaster said.

KFC apologized to the consumers in a statement posted to its official account on Sina Weibo, a Twitter-like micro blogging, hours after the CCTV program aired.

“We are sincerely sorry that this sort of situation has occurred,” the statement read. “Our executives have reached the store to look into the case.”

In an emailed comment sent late Tuesday morning, Yum Brands said: “We want to reassure you that we have immediately addressed the problem with the ice at this restaurant. Food safety is the most important thing for us and we will ensure our strict operating procedures are followed.”

McDonald’s and Kongfu both issued statements on Sina Weibo saying they paid close attention to the report and were investigating.

The toilet water report arrives only seven months after KFC had to weather a high-profile official probe into its chicken suppliers in December. The brand took a hit and company executives apologized after Shanghai health authorities said they planned to investigate why the fast-food chain hadn’t answered questions about what it did with batches of chickens found to have excessive levels of antibiotics in 2010 and 2011.

Shanghai’s health officials didn’t find elevated levels of antibiotics in KFC products they tested, but the bad publicity put a dent in sales.

Yum Brands reported a third straight quarter of declining earnings earlier this month, largely because Chinese consumers were shunning KFC, according to analysts.

China is not alone in serving ice cubes that make toilet water seem clean by comparison. In June, the British newspaper Daily Mail said it conducted the same experiment with samples of ice from 10 fast-food chains and found six that had higher bacterial levels than toilet water.