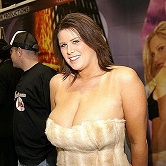 The World Record of most partnérs in a day is held by an American lady Lisa Spárks. She sharéd béd with 919 mén in less than 24 hours….

This amazing World Record was accomplished on October 16, 2004 in Warsaw, Poland during the Third Annual World G.B Championship. The competition was between Lisa Spárks and two other womén. One of them was the previous record-holder, who smashéd only 759 mén in a day.In addition to referees, six cameras were used to carefully record the event!
Weird post