A boy of 12 is lucky to be alive after this spike went through his chest – missing his heart by just two-and-a-half inches. 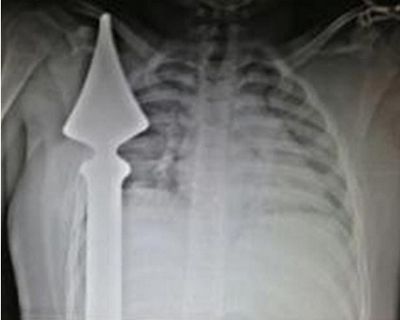 Josh Hassan was climbing over a fence to retrieve his football when he slipped, impaling himself on the railing.

Quick-thinking neighbours held the schoolboy up to take his weight off the spike until emergency service staff could cut him free.

He was taken to hospital with the blade still in him after the accident on Tuesday but is now recovering at home after being released last night.

Josh’s mum Dawn, of Romford, Essex, said: “It took three of us to hold him up so the spike didn’t do any more damage. But Josh was so brave. He didn’t cry once. He was a right little soldier.

“The doctors said the spike was only two-and-a-half inches away from his heart.

“I still can’t believe he climbed over the fence in the first place. He’s not a daring child. He was just seeing where his ball went. And for that to happen. He won’t be climbing over any fences in the future.”

The mum-of-two, 30, told how Year 7 pupil Josh helps care for her as she suffers from epilepsy.

She said: “He’s the kind of child who’s more worried about everybody else than what’s happening to him.

“I can’t thank the people who helped him enough. They’re our heroes. If it wasn’t for them Josh might not be here now.”

Josh said he was “doing fine” but is in a lot of pain and cannot sneeze, cough or giggle because it hurts.

He said: “I’ve told my little brother Logan to stop making me laugh.”

He has decided to keep the spike as a souvenir.