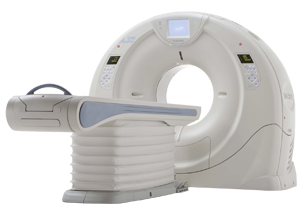 This might sound unbelievable but the Lagos University Teaching Hospital (LUTH) has acquired state of the art scanning equipment which has the capacity to run a check on all organs of the body, from head to toe, in less than 10 seconds and indicate potential death points for prompt treatment.

The machine; a 128-slice Aquillon CT scanner, is a novel not only in Nigeria but the entire West African region.

Chief Medical Director, LUTH, Professor Akin Osibogun, while speaking on the wonders of the scientific equipment, said that the ultra-speed of the scanner is an added advantage because of its ability to pick inner parts of the body while in motion and capturing tiny details that could be fatal.

Distinguishing between earlier generations of Computerised Tomography (CT) scanners and X-rays, Prof. Osibogun said the former is better in terms of diagnostic capability in that it produces clearer definitions and says the 128-CT scanner is the latest in medical equipment because of its ability to get clearer images of internal tissues and organs.

He said, “So the Aquillon CT scanner is a very fast machine, able to pick items in motion and that advantage enables us now to study even the heart as it is beating and as it is pumping out blood, so we are able to study the arteries, the veins as the blood flow through them, so if there is a thin blockage or a blockage is developing, the scanner is able to pick it.”

The CMD also highlighted the importance of the scanner over other imaging devices in detecting early signs of coronary heart diseases saying with its use, doctors can give better advise to patients and for those who have the means, he adds that it can be combined with interventional cardiology.

“You can remove small plague or small particles that are already forming on the way. It is just simply by introducing a catheter, you guide the catheter under the imaging device and go to where you want to go and remove what you want to remove, without opening the chest. The CT scanner can be combined to some extent with the interventional cardiology which we would introduce at a latter point. At this point because we just acquired the equipment, we will be using it largely for diagnostic methods to pick disease conditions and do that in a more precise manner” he stated.