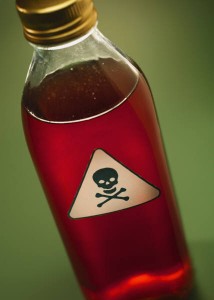 Men of the Ondo State Police command have arrested a 47-year-old bricklayer, Damilare Olotu, for allegedly poisoning his wife, Mary, for being barren.

Mary, an indigene of Kwara State was a trader and had been having running battle with the suspect over her inability to conceive.

Following the condition of the deceased, the suspect married a second wife, Kemi, from Igbara Oke area of the state who bore him two children.

The suspect who is from Akure used to live with the deceased in Ibuji, Ifedore council area of the state., but the second wife reportedly insisted on packing into the suspect’s house, a move the deceased resisted.

The deceased’s younger brother, Mr. Lawrence Omotosho, told newsmen that the suspect and the second wife connived to poison his sister.

According to him, the sister had told him that the suspect had threatened to kill her. He therefore asked the police to investigate the matter thoroughly and bring the culprit to book.

The deceased didn’t die without an issue as she had a child from her former marriage.

The child, Shola Olatunji who is an undergraduate in Kogi State said the family of her late mother warned her not to re-marry but she refused.

Confirming the incident, Public Relations Officer, Ondo State Police Command, Wole Ogodo, said investigation into Mary’s death was on-going, noting that the case has been transfered from Igbara Oke to the headquarters in Akure for. further investigation.

The corpse of the deceased has been deposited in mortuary for autopsy.