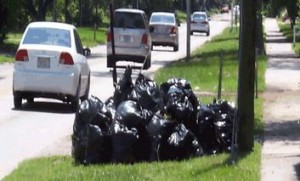 A man became very angry after his mother asked him to take out the trash, so he killed her, according to police reports in Indianapolis, Indiana.

Police said a man opened fire and killed his mother because of a dispute over garbage disposal.

Police said Bowman then fled to Morgan County, where the town marshal of Brooklyn shot him in the leg after resisting arrest. “So far we believe it was a dispute over the garbage, whether to take it outside or move it to a different location,” Kendale Adams with the Metropolitan Police Department Indianapolis, said. “The man then shot his mother several times, fatally wounding her.

I have understood that there were family members, including children, present at the scene at the time of the shooting,” Adams added. Next door neighbor Heidi Phipps said that Day was always helping around the house.

“She helped her mom a lot gardening, mowing the lawn,” said Phipps. “They had a garden in the back and she spent most of every day in the summer to work in the garden of her mother,” Phipps added.