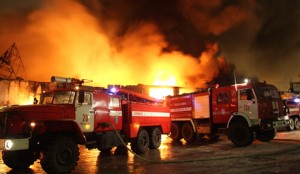 An oil pipeline has exploded in a rural area in central Mexico, igniting a huge blaze in which six people were injured, the state oil company says.

Petroleos de Mexico said on its Twitter account that Sunday’s blast appeared to have been caused by an attempted theft of crude oil.

Four policemen and two firefighters who responded to the explosion and fire were injured in a secondary explosion, Pemex said.

The incident occurred in an open field near the municipality of Tonanitla, about 40km from Mexico City.