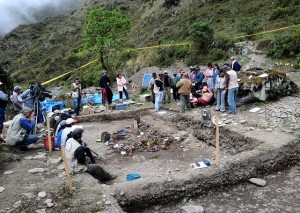 Peruvian prosecutors have exhumed from in and around Lima the bodies of more than 100 accused Shining Path rebels slain in a 1986 prison uprising, a lawyer says.

The men, all killed at Lurigancho prison, were exhumed beginning in mid-July from more than a dozen cemeteries as part of a probe into a massacre of inmates who had surrendered.

Relatives of the men have been seeking criminal charges against 30 former officials of the government of then-President Alan Garcia since 2001.

Their lawyer, Pedro Coello, told The Associated Press on Friday the bodies were buried secretly by the military and that soldiers had led authorities to them.

Prosecutors who allowed journalists to photograph the bodies refused to comment or to even identify themselves.

Some of the skeletal remains exhumed had bullet holes in the cranium, said Tania Vilchez, sister of Alfonso Vilchez, one of the slain inmates. She said she had attended 17 exhumations.

A truth commission that studied Peru’s 1980-2000 internal conflict found that more than 200 inmates were summarily executed in 1986 after surrendering at three prisons where rebels had rioted: Lurigancho, El Fronton and Santa Barbara.