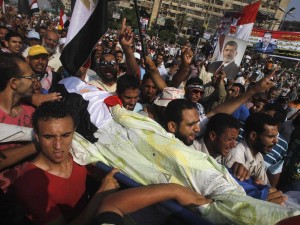 Dozens of supporters of ousted Egyptian president Mohamed Morsi have been killed in clashes with security forces in the capital, Cairo, after a night of mass protests.

The exact death toll from Saturday’s violence was not immediately clear, but reporters from Reuters and AFP news agencies counted more than 30 bodies laid out at a makeshift mortuary at a field hospital set up by the demonstrators.

Doctors at the field hospital said 75 people had been killed close to the Morsi supporters’ nearly month-old sit-in at the Rabaah al-Adawiyah Mosque in Cairo’s Nasr City.

If the death toll of 75 is confirmed it would be the deadliest incident since Morsi was deposed by the army more than three weeks ago. On July 8, 53 people, mostly Morsi supporters, died when armed men opened fire close to a Republican Guard compound in the area.

The prosecutor-general’s office announced on Saturday that it would launch an investigation into the violence.

Hundreds of people were wounded, medics said, warning that they could not cope with all the casualties.

Supporters and opponents of Morsi staged mass rival rallies across the country on Friday, bringing hundreds of thousands into the streets and laying bare deep divisions within the Arab world’s most populous country.

Army chief General Abdel Fattah al-Sisi had called for a mass show of support on Friday for a crackdown on what he called “terrorism”.

Hundreds of thousands of anti-Morsi protesters obliged and gathered in Cairo’s Tahrir Square and around the Itihadiya presidential palace.

Gehad El-Haddad, the Muslim Brotherhood spokesman, said the shooting started shortly before pre-dawn morning prayers on the fringes of the vigil being staged by backers of Morsi.

Thousands of supporters and opponents of the army’s removal of Morsi also took to the streets of the Mediterranean city of Alexandria, sparking fierce clashes that killed seven people and wounded 194.

A group of people who were trapped by armed men in one of the city’s main mosques have been released, but 70 remain inside, including women and children.

The Brotherhood’s political arm, the Freedom and Justice Party, called for more protests in the city.

Well over 200 people have died in violence since the overthrow of Morsi on July 3, most of them Brotherhood supporters.