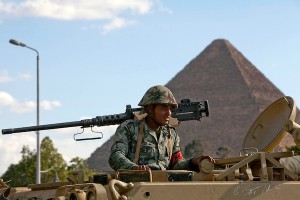 Egypt’s military moved to tighten its control of key institutions Wednesday, as security forces imposed a travel ban on President Mohammad Mursi and several top Islamist allies over their involvement in a prison escape in 2011, amid claims of a “military coup.”

“For the sake of Egypt and for historical accuracy, let’s call what is happening by its real name: Military coup,” Essam Al Haddad, Mursi’s national security adviser, said in a statement on Facebook.

As tensions mounted and crowds poured into the streets to demand Mursi’s resignation, Al Haddad said: “As I write these lines I am fully aware that these may be the last lines I get to post on this page.”

Airport officials confirmed to AFP that they had received orders to prevent the leaders – including Mursi, Muslim Brotherhood chief Mohammad Badie and his deputy Khairat Al Shater – from travelling abroad.

Earlier, a deadline set by the Egyptian army to Mursi to “respond to the people’s demands” expired, with the Islamist leader renewing his rejection of the opposition call for his resignation.

Mursi repeated his calls for “national reconciliation dialogue” to form a coalition government, a suggestion vehemently turned down by the opposition who believed the call came a little too late.

Defence Minister Abdul Fattah Al Sisi had “consultation” talks with leaders from the opposition and the country’s Muslim and Coptic institutions amid talks about a roadmap being drawn up by the army including Mursi’s overthrow.

Mohammad Al Baradei, a leader in the main opposition bloc, the National Salvation Front, attended the talks. Al Azhar Shaikh Ahmad Al Tayyeb and Pope Tawadross II of the Coptic Orthodox Church also attended, according to close sources. The army was set to issue a statement.

Thousands of Mursi’s opponents flocked to major squares around the nation, including Tahrir Square in Cairo, putting pressure on the army to remove Mursi from power.

Voices have been raised over the past months on Mursi’s style of leadership and policies, with the president sticking to his guts and his massive Muslim Brotherhood support to ‘impose’ his will on a few occasions which is now too much for his opponents to bear.

Mursi has remained defiant despite different calls. He apparently didn’t see the protests which started on June 30 coming, or he had his plans. Whether he will be able to hold his own in the middle of all of these or commit to reason and work something out with the, now involved army, and the opposition remains to be seen.