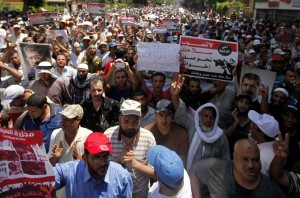 In its campaign to reverse the army’s overthrow of the elected Islamist president, Mohammed Morsi, Egypt’s Muslim Brotherhood has called for mass protests again, but it also gave a first sign of willingness to negotiate with its opponents.

Still stunned by the July 3 toppling of President Mohamed Morsi, his Muslim Brotherhood, and allies grouped in what it calls the National Alliance for Legitimacy, urged nationwide rallies on Friday, predicting millions would take to the streets.

Egypt’s military issued a stern warning against violence a day ahead of potentially massive protests called for by supporters of the country’s ousted Islamist president.

The military statement issued Thursday said that “whoever resorts to violence and deviates from peacefulness in Friday’s rallies will put his life in danger.”

The rallies aim to show Morsi’s supporters are not ready to accept the new military-backed government.

“To every free Egyptian man and woman: Come out against the bloody military coup,” the alliance said in a statement.

Brotherhood official Gehad el-Haddad, who represented the movement in previous EU-facilitated talks with other political groups, told Reuters that the organisation would not retreat from its demand for the reinstatement of Morsi, Egypt’s first freely elected leader.

However, a Brotherhood official also told Reuters news agency on Thursday, a day after a Muslim Brotherhood delegation met with top EU envoy Catherine Ashton, that the movement had proposed a framework for talks mediated by the EU.

Sworn into office on Tuesday, the cabinet of interim premier Hazem el-Beblawi busied itself with tackling the nation’s many woes, buying foreign wheat to replenish stocks and banking $3bn in badly needed aid from the United Arab Emirates.

Signalling for the first time a formal readiness for negotiations, he said the Brotherhood had proposed through an EU envoy a framework for talks to resolve Egypt’s crisis. “We never close the door to dialogue,” Haddad said.

The military has denied orchestrating a coup, saying it intervened to prevent chaos following mammoth protests on June 30 against Morsi’s much-criticised, year-long rule.

At least 99 people have died in street clashes since Morsi’s downfall, more than half of them when troops fired on Islamist protesters outside a Cairo barracks on July 8.

A security source told the official Middle East News Agency that policing would be intensified at “all important and vital facilities” on Friday to ensure protests are as peaceful as they can be.