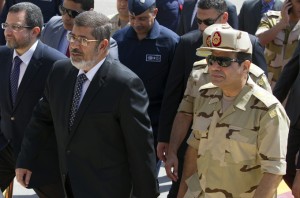 The Muslim Brotherhood’s defiant reaction to an ultimatum given by the army sets the tone for a showdown between Egypt’s powerful group and the military, according to analysts.

On Monday, the army sternly told President Mohammad Mursi, who belongs to the Brotherhood, to end a deep political crisis with the opposition and gave him two days to “respond to the people’s demands”.

“The Brotherhood will not surrender easily in this battle for survival even after the Armed Forces’ intervention in the crisis,” said Helmi Farouq, a military expert.

Hours after the army’s warning, the Brotherhood ordered its supporters to take to the streets across the nation to object to what its officials called the army’s “coup against legitimacy”.

The secular opposition is demanding that Mursi, Egypt’s first democratically elected president, steps down and calls early presidential elections. His backers have vowed he will complete his term, which ends in 2016.

“The Brotherhood’s defiant response is predictable. I think the army expected this and is prepared to handle it. The Brotherhood will resist until the last breath, making use of its Islamist allies in order to cling to power,” Farouq told Gulf News.

Some backers of Mursi have openly threatened to cause unrest if he is forced to resign.

“Such threats may be a mere bluff or they can become true as the noose is further tightened around Mursi. You can expect further trouble particularly in Sinai,” Farouq said, referring to Egypt’s restive desert peninsula believed to have drawn hundreds of jihadists in recent months.

Vicious clashes between Mursi’s backers and opponents erupted on Tuesday in several areas of the country.

Farouq played down fears that Egypt will plunge into a civil war similar to the one experienced in Algeria in the 1990s, when army generals annulled results of the legislative elections swept by Islamists. More than 200,000 were killed in Algeria’s war.

“In its statement, the [Egyptian] army made it clear that it does not have any ambition for power. The army has not forgotten its painful experience when it ruled the country for 16 months after [Hosni] Mubarak’s fall in 2011,” said Farouq.

“Moreover, the vast majority of Egyptians are on the side of the army and do not have doubts about its agenda.”

Mursi’s office said the president was not informed in advance of the army’s communiqué, which the presidency said could “deepen national divisions”.

In the army’s televised statement, read out by Defence Minister Abdul Fatah Al Sissi, the military said that if the political crisis is not resolved by the given deadline, it will announce a future roadmap for the country and oversee its implementation.

“The army command has made a mistake by issuing a statement that ignored the president and did not mention a single word on the constitution and law,” said Essam Al Erian, a senior Brotherhood official.

“The people will not allow its willpower, reflected in electing a civilian president (Mursi) and approving the constitution, to be tampered with,” Al Erian posted on his Facebook account.

To Mohammad Bilal, the army’s intervention to break the political deadlock is an essential part of the military’s duty.

“Protecting the national security is the main task of the Armed Forces as stated in the constitution. The domestic front is part of this security. The huge numbers of Egyptians are out in the streets, demanding Mursi to leave. Thus, the Armed Forces have not exceeded their authority,” he added.

“If Mursi is really the president of all Egyptians, he has to step down to prevent bloodshed of the people,” Bilal told the private Dream TV.

Deadly clashes have occurred between Mursi’s backers and opponents in the past three days.

“The army will not return to power. It will just act as a guarantee of implementing the roadmap, which will set dates for early presidential and parliamentary elections and creating an independent committee to amend the constitution,” said Bilal.

The opposition says the constitution, drafted by an Islamist-dominated panel and approved in a referendum last December, is defective and should be changed.