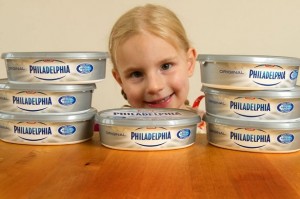 A child with a condition that left her mute has made an inspreadable breakthrough and spoken her first words – thanks to cream cheese.

But after eating a kilo of Philadelphia every week for three months, she said her first word: “Mum.”

GLUT1 deficiency is a rare condition which affects just 26 people in the UK.

It leaves the brain starved of energy because the body cannot transport enough glucose.

After taking more than a year to diagnose Fields, medical experts put her on a high-fat ketogenic diet, which forces the brain to use this as its energy source rather than glucose.

“I didn’t really believe that something so simple as changing her diet could make such a big difference.

“But within weeks you could see it working – she was more alert and her personality seemed to come out a bit more.

“Then, one morning I was in the kitchen and I heard this little voice. I just couldn’t believe what I was hearing.

“There have been times when I’ve thought I would never hear her speak.

“It’s fabulous to know that she does have a voice inside her and we can communicate.

“Now she’s started shouting for the dog and saying bigger words – she said ‘dinosaur’ the other day. I nearly cried.”

Stevie and husband David first noticed something was wrong with their daughter when she was 15 weeks old.

Stevie said: “I had a normal pregnancy and normal birth but when Fields got to 15 weeks, she started getting a twitch in her wrist.

“I took her to see the GP when all of a sudden she had a seizure in the waiting room. I was petrified.

“She went really vacant, like she was going into another world.”

Fields was diagnosed with epilepsy but it was another 12 months before medics realised she was suffering from GLUT1 disorder.

Her ketogenic diet is high in fat and very low in carbohydrates. Fields must also drink 50ml of a special oil four times a day to boost her fat intake.

Stevie added: “Sweets, cakes and fizzy drinks are out, but anything high in fat is great for her.

“The amount of Philadelphia she goes through is mad but worth it. It really has been our saving grace. She loves the stuff and piles it on crackers.

“It doesn’t affect her weight either as she uses up every bit of fat she eats – she doesn’t store any of it.”