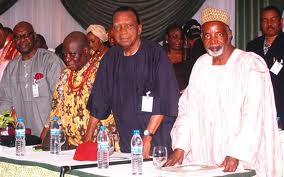 Elder statesman and Chairman of The Patriots, Professor Ben Nwabueze (SAN), has said he will not engage in a war of words with frontline Ijaw leader, Chief Edwin Clark, who he described as his student.

Clark, had described Nwabueze as a person “camouflaging (his) political ideas and ambition with intellectualism” and an “unpatriotic saboteur of the democratic process” in a recent statement declining his invitation to an event organized by The Patriots.

But responding to Clark’s vituperations against his person in a statement, the legal luminary noted that he served under the regime of General Ibrahim Babangida and not Sani Abacha as claimed by the South-South Peoples Assembly leader, adding that there was nothing unpatriotic or undemocratic in his advice to President Goodluck Jonathan not to contest the 2015 election and focus his attention on the nobler task of leading Nigeria out of present danger.

He said: “I only advised that the President, in exercising his God-given will and democratic/constitutional right, should not seek re-election in 2015, in order to be able, unconstrained by political interests, forces and considerations, to pursue the nobler object of leading Nigeria, as one united people, out of the present quagmire in which it finds itself.

“There is nothing ‘unconstitutional’ about the advice, as it leaves the President entirely free to decide for himself. My advice was given in all sincerity as what I would personally do if I were in the President’s position. But of course, as I said in the statement in which I gave the advice, he shall never be me, nor will I ever be him. He and I are created different human beings, with different visions, outlooks on life and passions.

“I do not wish to exchange vituperative words with a former student of mine, whom I am proud to have taught Law in London in the 1960/61 and 1961/62 academic years, except only to say, by way of correction, that I served as Minister under the regime of General Babangida, not General Abacha.

“I hope he will, as a mark of respect properly due to me from him as his former teacher, change his mind and attend the Uyo National Summit, now postponed to August 26, 27 and 28, 2013 especially as Mr. President himself has indicated his intention to be at the summit personally. I urge that we all get together at the summit to put our heads together in a joint effort to find solutions to the problems and challenges facing our country.”