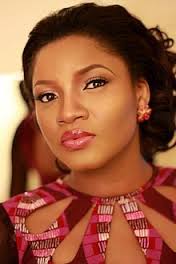 It is no doubt that not many men would allow their wives to take up acting as profession and the reason is not far-fetched. With the jealous nature of men, it is very rare to see a man accepting another man cuddling or touching his wife all in the name of acting or practising a profession she likes.

That is why it is very common in this part of the world to see actresses dumping acting shortly after getting married. Most of the men they marry tend to kick against the profession after they must have said ‘I do’.

Omotola Jalade-Ekeinde, who is married to a pilot, Capt Mathew Ekeinde is one of the sexiest screen divas in the movie industry in Nigeria, and most men would like to do anything to have for keeps.

When in front of the camera, the mother of four delivers and interprets her role to the letter. When it comes to romantic scenes, she gives her all in making her character looks real, which surprises most of her fans, who wonder how her husband takes such scenes when he stumbles on them.

When asked by one of her fans on twitter, a popular micro-blogging platform, if her hubby gets jealous when a guy kisses her on set, the actress answered in the affirmative.

“Does your husband get jealous when you kiss a guy in a movie?” a fan asked the Ondo State-born actress, and she replied, “Yes, if the guy is cute.”

Now you know how Omosexy’s husband reacts to her romantic scenes in movies when he sees them.