“My Marriage Is Still Intact” – Funke Akindele Cries Out

“My marriage is intact”, she said in an SMS message. 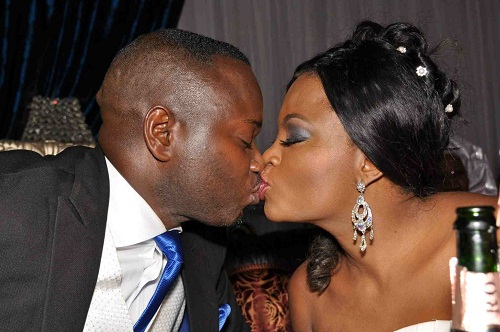 The message reads: “I read in the newspaper yesterday that I am divorced. What proof do you have? And I am taking this to court because my marriage is intact. You guys are rumour mongers. Funke Akindele Oloyede.”

Her husband, Kehinde Oloyede on Monday announced a “separation” via his facebook page. He said: “It is with heavy heart that I am announcing the separation of me and my wife, Mrs Olufunke Akindele. We have both agreed to go our separate ways because of irreconcilable differences. We are still best of friends and we would forever remain good friends.”

The statement, which the actress’ husband has since deleted from his facebook wall, generated concerns among the star’s fans, who made the issue a major topic on social media platforms.

Reports say her husband may have removed the “notice of separation,” including a more defiance follow-up post from his facebook wall, due to pressure from friends and family members. The actress is said to have been crying inconsolably since the incident, fearing criticisms by her fans and her clients’ reactions.

Funke’s decision to marry the real estate business man, was severely criticised by her fans who wondered why she should get involved in polygamy. She rebuffed critics on one occasion, saying: “I can tell you authoritatively that my husband is not married to anyone else. Yes, he has beautiful children, who are not mine and we have a cordial relationship, which dates back to even before we got married.”

On another occasion, she told her critics: “Will you be happier if I had married someone who didn’t have children, seems so perfect, put on my make-up and fake smile on the red carpet and start weeping when I get home? About my in-laws, they are very wonderful and supportive and my parents and siblings as well. ”

Meanwhile, apart from deleting the statement from his Facebook wall, Oloyede is yet to refute the announcement in any way.