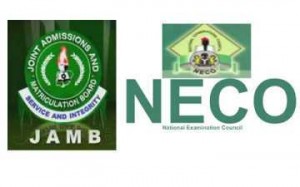 Non-Academic Staff Union of Educational and Associated Institutions, NASU, has advised Federal Government to retain the central admission system for Nigerian universities and jettison the Oronsaye report that recommended the scrapping of National Examination Council, NECO.

Rising from its meeting held in Lokoja, Kogi State, the union’s WAEC, libraries and other trade groups’ branch described the proposals contained in the Steve Oronsaye committee report.

NASU described the report, which recommended the scrapping of the Unified Tertiary Matriculation Examination and the merging of NECO with West African Examination Council, WAEC, as “retrogressive, unproductive and one that will worsen the education sector in the country.”

The union said: “It will increase the level of unemployment, the ills in the society and also defeat the essence of national cohesion.”

NASU’s views were contained in a resolution signed by its Deputy President, Mr. Michael Adegoke and Secretary, Prince Damola Adelekun.

It expressed concern about insecurity in the country and called on all tiers of government to “intensify action in protecting the lives and property of the citizenry.”

However, labour relations appear strained between the union and WAEC as the union accused the management of WAEC of high-handedness.

Making reference to the queries issued to three principal officer of the union in WAEC, the union said: “The cordial industrial relationship that has been in existence between the Union and WAEC is being threatened by this repressive, choice of monologue and oppressive posture of WAEC management.”

It advised the management of WAEC to “as a matter of urgency, start dialogue with the union over the demands of its members. [Vanguard]

“The union will not compromise the rights of its members at any time.”