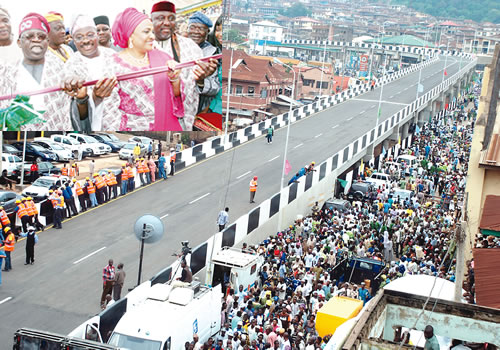 A former governor of Oyo State, Senator Rasheed Ladoja, has had his educational qualifications questioned by the state chapter of the Action Congress of Nigeria (ACN) over his criticism of the newly-commissioned bridge by the state government.

The former governor and leader of the Accord Party, in a newspaper interview, said the erection of barriers on either ends of the new bridge at Mokola Roundabout, Ibadan, suggested that the edifice was of poor quality, hence the restriction.

But the ACN said Mr. Ladoja’s comment was borne out of mischief.

Speaking through its state publicity secretary, Dauda Kolawole, the ruling party in the state accused the former governor of “exhibiting his widely perceived mental limitations and depth.”

“We wonder which school of engineering Ladoja passed through. Was he ever taught Introductory Highway Engineering in school? If he was, even though he claimed to be a Chemical Engineer, this naivety, dressed in the robe of ignorance, would have been addressed at such an elementary level. This naivety is too striking and recommends that his engineering certificate be withdrawn forthwith,” the party said in a statement issued in Ibadan on Wednesday.

The party explained that the barrier was erected to prevent articulated vehicles from plying the fly-over to reduce risk of accidents.

“This is a usual Ladoja trait. He presents as a yokel, even on matters that demand frankness and forthrightness. But this exhibition of palpable naivety is embarrassing. To imagine that such a person who could not articulate the need for a reduction in highway casualty had been in the governorship saddle for that long in Oyo State is worse than a casualty.

“Ladoja is simply continuing his interminable dream. He said in that interview that he dreamt to build the Mokola bridge and two others. We have reminded him in the past that, all over the world, no one remembers dreamers.

“Indeed, graveyards are full of them. The world only celebrates achievers and actualizers. He should continue to dream, while Ajimobi actualizes. He also claimed that he had a blueprint which Ajimobi was following. Between Ladoja and Ajimobi, in terms of their mental depth, who should copy the blueprint of the other? It is his usual trait of deceptive politicking aimed at giving him undeserved relevance,” the ACN said.