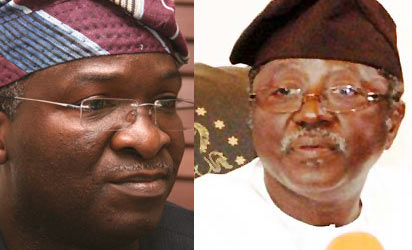 Factional chairman of Nigeria Governors’ Forum (NGF) and governor of Plateau State, Jonah Jang yesterday opposed moves by his Lagos State counterpart, Babatunde Fashola (SAN), to withdraw a suit seeking to restrain him (Jang) from parading himself as chairman of the Forum.

Counsel to Governor Fashola, Prof. Yemi Osinbajo (SAN), did not disclose reasons for the sudden decision to discontinue the proceedings, which is before an Abuja High Court but Jang’s lawyer, Tayo Oyetibo (SAN), who opposed the plaintiff’s move, rather prayed for a dismissal of the suit rather than strike it out as requested by the plaintiff.

Information Nigeria gathered that Oyetibo’s prayer, if granted, would prevent any further plan to re-file the matter by the plaintiff.

Oyetibo’s opposition was based on the provisions of Order 27, Rules 2 and 6 of the High Court, which stipulates that a motion to which defendants had filed statements of defence could not be withdrawn without the permission of the court.

Osinbajo, who announced that he had filed a notice seeking to withdraw the suit against the defendants in a notice dated July 16, 2013, but copies of which were served on the defendants in the courtroom yesterday, July 17, 2013, asked the court to strike out the suit.

A prayer which was immediately opposed by Oyetibo.

The defendant noted that since the plaintiff filed a motion to which they (defendants) had already responded, it was impossible for him to withdraw the matter without the court’s permission.

He said, “An applicant is bound by the prayers contained in his motion – they are seeking leave to run away. My submission is that the proper order is to dismiss the suit, not to strike it off as requested by the plaintiff.

“This is because, in light of all the materials placed before this court so far, the plaintiff has realised the weakness of his claims against the 1st defendant.”

But Osinbajo disagreed stressing that the decision to withdraw the suit was not based on any purported weakness.

Hearing on the motion was adjourned to September 9, 2013, by the Presiding judge, Justice Peter Affen.