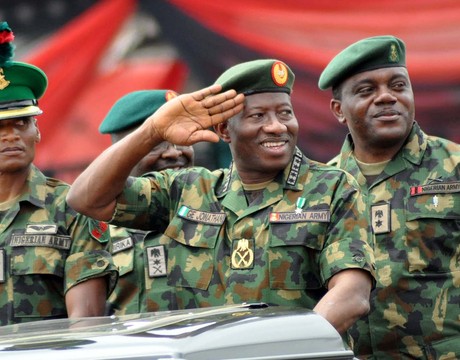 President Goodluck Jonathan on Saturday in Abuja urged the military to abide by the rules of engagement and have respect for human rights in the fight against terrorism.

Mr. Jonathan, who was the Reviewing Officer and the Special Guest of Honour, made the call at the parade to mark the grand finale of the 2013 Nigerian Army Day Celebration.

He said that he was pleased that the initial assessment report of the conduct of military operations since the declaration of emergency rule revealed that the strategies had been well thought out and was progressing satisfactorily. He said that government services and
private businesses had resumed in areas previously occupied by the insurgents, adding that the people in those areas were gradually regaining their lives in confidence.

“As we march forward, I urge you to continue to abide by the Army hallow practice and core character of service.

“I also urge you to keep to the rules of engagement, especially respect for human rights in all your operational activities.

“In the current stabilising phase of your operations, the welfare and wellbeing of the people of the communities where you live and work must be your primary focus,” Mr. Jonathan said.

The president urged the military to defend the citizens and foreigners living in the country against terrorist elements. He also advised the military to strengthen its collaboration and synergy with other security agencies and friendly partner nations to enhance their
effectiveness.

“Terrorism is anti-people; it is anti-progress and we must stamp it out of our nation,” he said.

“This administration’s firm resolve is to do everything in our constitutional powers to ensure the security and safety of all law abiding citizens.

“It is a commitment that we have made and kept with great dedication, and we will continue to keep it,” Mr. Jonathan said.

He assured the Nigerian Army and all the members of the armed forces of the commitment of his administration to their well being and pledged that government would continue to support the armed forces and meet their needs.

“I want to specially congratulate you, your spouses and families on this important anniversary. I want to thank them for standing by you as you serve our nation. Nigeria deeply appreciates your sacrifice,” the president said. (NAN)