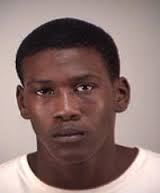 Police say they caught a robber in Lady Lake area in Florida taking jewelry and a nap.

Domonique Pinkard, 21, was allegedly asleep on the couch of a residence on Winners Circle when the home owner walked into the living room, reports say.

The homeowner called the cops, who determined that Pinkard and his accomplice, 20-year-old Julian Evangelist, kicked in the back door around 7:30 a.m.

Pinkard then conked out on the sofa while Evangelist allegedly made off with a TV.

Evangelist, it seems, failed to wake up his partner in crime.

Investigators say Pinkard told them he’d been “working hard all day and he just needed to sit down for a moment, and evidently, he fell asleep.”

Police also say they found an estimated $500 worth of the victim’s jewelry in Pinkard’s pockets, according to NBC Miami.

Other items, including clothing and electronics, were allegedly found at Evangelist’s home.

Both men were jailed on charges of burglary and grand theft.