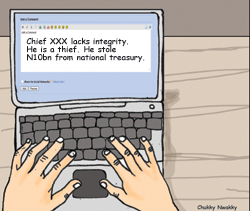 The social media, the world over has provided individuals with the opportunity to express themselves. Unlike real life situations where social etiquette and manners are largely restrictive and limiting, people tend to have a greater sense of freedom in expressing their interests, feelings, ideas, views and opinions on social media.

While browsing the comment sections of some news websites, blogs, forums and discussion groups, one often stumbles on touchy comments or reactions by online readers whenever they feel disenchanted by the subject of a certain news story.

For example, Jonathan’s adventure and engagement with Nigerians on Facebook has made him one of the most insulted personalities on the social network. Many Nigerians who object to his policies have taken advantage of the social media to continually criticise and hurl insults and abuses at him at every opportunity.

Besides, despite Facebook’s Statement of Rights and Responsibilities, which clearly warns users to  respect the rights of other people and to avoid posting content or taking any action on Facebook that infringes or violates someone else’s rights, it is common to see some people commit slander, spread lies or use lewd and profane languages to hurt others.

It is so easy for someone to upload a video on YouTube, start a group on Facebook, tweet a statement on Twitter or open a blog and start writing to attack another person’s reputation. The spontaneity with which messages go viral on the Internet further complicates matters.

However, legal experts in Nigeria warn that social media users who engage in the act of damaging people’s reputation need to retrace their steps.

According to them, the absence of a comprehensive law in the country, since Nigeria has yet to have specific laws addressing slander committed via social networks, should not be seen as providing a leeway for citizens to engage in such despicable acts.

They argue that the Evidence Act as amended in 2011 makes provision for the admissibility of computer generated evidence to prove such cases in the law court.