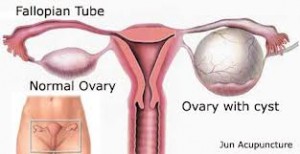 Ovarian Cysts and Tumors
The ovaries are two small organs located on either side of the uterus in a woman’s body. They make hormones, including estrogen, which trigger menstruation. Every month, the ovaries release a tiny egg. The egg makes its way down the fallopian tube to potentially be fertilized. This cycle of egg release is called ovulation.

What causes ovarian cysts?
Cysts are fluid-filled sacs that can form in the ovaries. They are very common. They are particularly common during the childbearing years.

There are several different types of ovarian cysts. The most common is a functional cyst. It forms during ovulation. That formation happens when either the egg is not released or the sac — follicle — in which the egg forms does not dissolve after the egg is released.

2. Germ cell tumors start in the cells that produce the eggs. They can either be benign or cancerous. Most are benign.

3. Stromal tumors originate in the cells that produce female hormones.

Doctors aren’t sure what causes ovarian cancer. They have identified, though, several risk factors, including:

1. Age — specifically women who have gone through menopause

4. Not having children or not breastfeeding (however, using birth control pills seems to lower the risk)

5. Taking fertility drugs (such as Clomid)

7. Family or personal history of ovarian, breast, or colorectal cancer (having the BRCA gene can increase the risk)

What are the symptoms of ovarian cysts and tumors?

Often, ovarian cysts don’t cause any symptoms. You may not realize you have one until you visit your health care provider for a routine pelvic exam. Ovarian cysts can, however, cause problems if they twist, bleed, or rupture.

If you have any of the symptoms below, it’s important to have them checked out. That’s because they can also be symptoms of ovarian tumors. Ovarian cancer often spreads before it is detected.

Symptoms of ovarian cysts and tumors include:

1. Pain or bloating in the abdomen

3. Dull ache in the lower back

You should see a doctor if you are experiencing any of the above signs and symptoms.