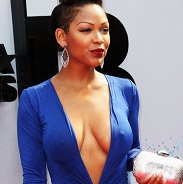 Think Like A Man Too star Meagan Good had to deal with some intense  criticism after hitting the 2013 BET Awards red carpet in a bright blue gown with a plunging neckline and she has decided to set the record straight.

“@adriannacolbert That’s the thing Girl- is that I don’t feel convicted about this at all. my spirit is saddened that our people only know one way to think and process things..

I’m not any less holy because the dress I wore -I may not be who people think I should be -but I’m morphing into exactly who God wants me to be.. My excuse is never “I’m going to do me” and I don’t feel that I need to make an excuse or defend or what I wore .. I know I have a responsibility -and I’m working daily to fulfill the full potential of all God has created me to be..

A dialogue was started about my character, integrity, my walk with God and my Husband -simply based on a dress that I wore.., Of course I’m going to have a reaction to people saying negative things… It’s just sad.. Makes me sad not regretful.. My heart and spirit is always open to whatever my Father would want to share with me… And my spirit tells me to be exactly who I authentically am -because that’s what’s going to reach who I was authentically designed to touch.. people like me who are often misunderstood and told their cut of God’s promise -because they don’t look the role …when God doesn’t care about us “looking the role”..he is always cared about bringing us in -and us being whatever we need to be to bring Those left out in ..

And it just makes me sad that us as Christians can’t see beyond our initial reaction and don’t seek God before the attack other brothers and sisters …and never think for one moment that: God knows what he’s doing and he uses everything for his glory .. and he has a plan for every specific situation.. I had intentions on anything .. Merely picked a dress I saw and loved … God knows my heart and that I didn’t do anything wrong .. And he will use even people’s thoughts to bring him glory.”

” […] I’m getting séxy and all that but there is a way to do it, there is a classy way to do everything and there is nothing wrong with being séxy or having séx appeal and I think that I am definitely going to be someone who is boldly going to go out to the masses and be someone who say, ‘ Look! Women its okay to do this, that and the other,’” Good said while speaking at One Church International in Los Angeles earlier this year. “…I don’t like [how] sometimes people who are religious will try and force everyone into a box and judge them.”