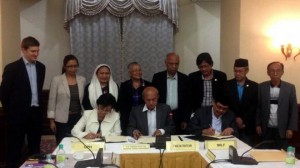 A rebellion that has lasted a decade in the Philippines has brought Manila to concluding having a deal with Muslim rebels to stop more deaths after tens of thousands of lives have been lost is the best for the country.

The Philippines said Sunday it has clinched a key “wealth-sharing” deal with Muslim rebels.

Moro and government peace negotiators signed the annex on wealth sharing past midnight, wrapping up a crucial provision on the Bangsamoro framework peace agreement.

The wealth sharing annex was signed the end of a marathon six day session that started Monday in Kuala Lumpur, Malaysia. It is a vital portion in the FAB which concerns how the envision Bangsamoro political entity will fiscally sustain itself.

According to a report by the ANC cable channel, the negotiators have agreed to a 75-25 sharing in revenues with the bigger portion in favour of the Bangsamoro.

“The negotiating parties believe that the annex will provide sufficient guidance for the crafting of the Bangsamoro Basic Law’s provisions on wealth sharing and revenue generation for the Bangsamoro as envisioned by the FAB,” the joint statement said.

While negotiators have hurdled an important juncture in the process to arrive at a final peace settlement, a government representative in the talks said Coronel-Ferrer said much work still lies ahead.

Coronel-Ferrer was quoted in the ANC cable news channel that the annexes on “power sharing and normalisation” are to be taken up next month after the end of the Ramadan.

“I can imagine these will just be as intense,” she was quoted as saying by the ANC.

Power sharing would involve the form of a new administration that will take over from the present Autonomous Region in Muslim Mindanao (ARMM) while normalisation would likely entail the integration of thousands of Moro fighters into a regional defence body.

For its part, the presidential palace said it is “happy” with the development on the wealth-sharing annex.

“We are happy with the development,” presidential deputy spokesperson Abigail Valte said in an interview aired by government radio station dzRB.

The parties expressed their appreciation to President Benigno Simeon Aquino III for his commitment to a just and lasting peace in Mindanao, to Malaysian Prime Minister Dato’ Sri Mohammad Najeeb Bin Tun Haji Abdul Razak for his continued support in the facilitation of the GPH-MILF Peace Talks, as well as members of the International Contact Group, namely Japan, The Kingdom of Saudi Arabia, Republic of Turkey, the United Kingdom, Centre for Humanitarian Dialogue, Conciliation Resources, Muhammadiyah, and The Asia Foundation.