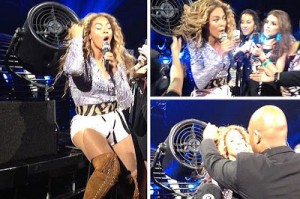 Recently, Beyonce’s hair got caught in a fan during a performance for her Mrs. Carter World Tour show stop on Monday (July 22) in Montreal, Canada. How did it happen?

She had been performing her hit track, “hallo”, when her hair got caught in a fan stationed behind her. Two security guards helped untangled the singer’s locks and the funny thing is that the singer kept on performing the song as if nothing had happened. Shorltly after the incidence, she parodied her hit Halo to describe the fan incident, beating any other person who might have intended to make fun of her.

Some people have pointed out that more people were interested in reading about Beyoncé’s hair upset than about the royal baby’s birth in London, England. Hehehe…if you have not read about the birth of the royal baby here, then you are the one we are looking for!