A 70-year-old man from Philadelphia was found unconscious at his home surrounded by dead cats, excrement and waste. 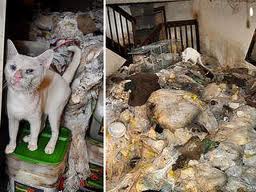 Authorities have said the conditions inside the house in the northeast of the city were astounding and nauseating, with the overwhelming stench of rotting animals decaying in the scorching heat.

According to George Bengal, PSPCA’s director of law enforcement, when they walked into the house, it was a house of horrors.

“It’s a hoarder house, a huge mess, dead animals, live animals. Really bad. ‘I have never seen a house in my life like this inside. The infestation of parasites in this property and just the overwhelming amount of feces that’s in this property, it’s incredible,” said Mr Bengal.

The man had lived in the house, on Bickley Street in Bustleton, Northeast Philadelphia, for the past two decades.

The place had become overgrown with trees on the outside, filled with garbage and animal waste from the floor to the ceiling, infested with parasites and vermin. More so, the roof was caving in and the basement was flooded.

After getting a search warrant, crews wearing full body hazmat suits including breathing apparatus entered the home. Mr Bengal said that his staff estimated there could be dozens of cats inside.

The homeowner, who was not identified, was discovered by family members who then called the emergency service and he was taken to Nazareth Hospital.

The society for the prevention of cruelty to animals (SPCA) plans on charging the homeowner with animal cruelty. A sign has been posted on the door of the home saying it has been deemed unfit for habitation.