My name is Tayo Sobola but I’m popularly called Sotayo. I am an actress. I attended Hopebay College, Lagos, had a Diploma in Law at the Lagos State University, and read Public Administration at the Olabisi Onabanjo University, Ogun State. I have had two nominations this year-most promising Actress, 2013 Yoruba Movie Academy Awards and Best New Actress (Yoruba) City People Entertainment Awards 2013. 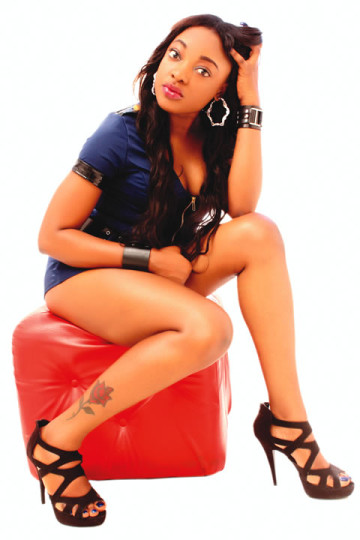 In 2003, I joined the Actors Guild of Nigeria. Also, I featured in some movies with minor roles. I had to stop after my course in LASU and resumed for my degree programme in Ogun State. I returned to acting in 2006. Then, I was presenting on television, was modelling, and had music video appearances (a vixen) and red carpet hosting. With acting, I just wanted to harness my skills, creativity plus flexibility. My mother was not in support initially but along the line, my father made her accept my views. My first time with the camera was awesome. It was a dream come true! It was a musical stage performance in 2003.

No, I don’t get intimidated with any big name when I’m on set. I am not a newcomer. I’m quite confident and I believe in my skills and ability. I look up to Joke Silva because of her humility and she is always ready to support young talents.

The major Yoruba movie I did was titled “Ewu Loko Longe.” I also did the 2012 Rhythm Unplugged advert with Basket mouth, Bovi and Buchi. Followed by some other comedy skits for Bovi. The inspiration to produce, my movie, “Arewa Onijogbon,” came from a friend. She actually encouraged me to produce a movie for myself and after three years of producing my first, I did a review of the movie and decided to up my game with “Corper Jide.” I get inspired anytime I am working with good directors and casts. Also, a good script inspires me.

Life as an actress

It is a movie in itself. It takes a person who knows you well to believe you when you are talking because they see you as acting. You dump some friends; have new ones because you meet new people on daily basis. You try not to look too different from how you appear on screen and tolerate people that get on your nerves! It is a different life from the real life. What we do is mostly make-believe. It is not our personality.

It’s my tenth year in the entertainment industry and as an actress, I try my best to stay away from troubles or anything that can lead to scandals. Even if I become one of the most popular actresses, I will still keep myself like I have always done.

I’m neither married nor engaged to anyone at the moment.

I have my way of dealing with them. I try to be nice to people who come my way. I don’t look down on anyone but there’s a limit.

I love to wear what I like and feel comfortable in. My mood determines what I wear and how I look. I don’t like to wear what others are wearing. I live in a different world and I love to stand out. My beauty routine? I try as much as I can to treat my face once in a week because I break out a lot. I also visit the gym when I’m less busy because I’m afraid of having a big stomach.

My dream is to become a well-respected mother and wife with fat accounts.