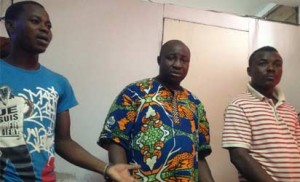 Surprisingly, one of the suspects, Ismaila Adetoro, 40, was a police informant. The suspect who confessed to have abandoned the illicit business two years ago before becoming a police informant, told Vanguard that he was tempted to go back because of the stipend the Police paid him as an informant.

“The suspects,” according to the officer in-charge of the unit, Friday Ibadin, an Assistant Commissioner of Police, “had been regular visitors to the spot. Acting on tip off, the policemen led by Sector Commander, Onaghise Osayande, a Deputy Superintendent of Police stormed the scene weekend while the vandals were at the verge of leaving with the loaded 33,000 litres truck with number plate XP 453 SMK.

“Four of them, Ismailia Adetoro, 40, Raufu Odoniyi, 39, Oyedeji Salim, 22 and Tobi Olalekan, 25, were arrested at Sagamu area in Ogun State. Ismaila popularly known as commissioner has been on our wanted list.

“Investigation revealed that despite the fact that he was helping the police to track down vandals, he was also actively involved in the act.

“The fight against pipeline vandalization is a collective responsibility of all and we should be proud to help law enforcers to protect our natural resources which are there for our development.”

Ismaila said he was forced to go back to vandalism because the Police failed to review his payment as an informant.

“I was into pipeline vandalism but stopped when I realised the danger involved. I decided, rather, to help the Police fish out vandals by alerting them anytime I discovered any illegal act in Sagamu area. In return, I was compensated.

“But the truth is that I am a family man with so much responsibilities and what they were offering did not help matters at all. At a point, my vulcanizing business was no longer booming. And because there was no attempt on the part of the police to review the payment, I decided to go back.

“I called one Alhaji and asked him to include me in his next deal. But unfortunately, I was arrested.”

Oyedeji in his own statement however said, he woke up that fateful Saturday to find himself in the bush where the petroleum product was being siphoned.

On how that was possible, he said, “I am only a motor boy who assist the truck driver. At the end of each trip with the truck driver, I would sleep inside the vehicle. On the day in question, I was not informed we were going for any trip, I only woke up to find myself inside the bush . I had no option than to help my boss, the driver. I honestly do not know they were into an illegal business”.

The suspects according to Ibadin, would be charged to court soon. [Vanguard]