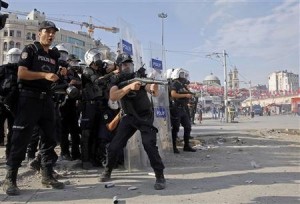 Some 3000 demonstrators who tried to enter flashpoint protest spot Taksim Square in Istanbul, capital of Turkey have been stopped by riot police who fired tear gas and water cannon to disperse them.

The group had gathered on the Istiklal Avenue pedestrian way that leads to the square, the site of nearly three weeks of protests against Prime Minister Recep Tayyip Erdogan and his Islamic-rooted government that left four people dead and some 8000 injured.

Several people were arrested on Saturday.

Protesters said they wanted to reclaim nearby Gezi Park, the birthplace of the unrest, which authorities announced earlier on Saturday would reopen to the public after it was shut in mid-June.

Authorities warned however that no further protests there would be tolerated.

“We intend to reopen Gezi Park on Sunday or Monday at the latest so that it is available for people to use,” said Istanbul governor Huseyin Avni Mutlu.

But, he continued, “parks are not places for protests. They must serve as a place of calm and tranquility for all people.”

A brutal police crackdown on May 31 against a peaceful sit-in to save 600 trees in the park sparked June’s nationwide protests against Erdogan.

Protesters occupied the small park day and night before being evicted by police on June 15.

Since then, the park has been closed. But in the face of public anger, authorities planted additional trees and a Turkish court annulled a government decision to redevelop the park, saying locals had not been sufficiently consulted about the project.

A statement from protest group Taksim Solidarity said: “We are returning to our park to deliver the message to those who stopped us from accessing it that the courts have dropped a redevelopment project designed to rob the park of its identity, of its users and to turn it into concrete.”

Residents feared the redevelopment plan would turn the area into a shopping district, while urban planners and ecologists said the proposals did not respect the environment.