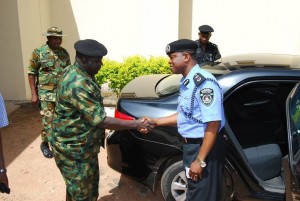 The Bayelsa State Police Command, yesterday, described as unfounded, the 4th Brigade of the Nigerian Army in Benin City’s claim that the police inspector, Nanagha Aduomeni, who was arrested and paraded was involved in armed robbery along Bomadi Road in Delta State.

The 4th Brigade of the Nigerian Army had, on Thursday, paraded Aduomeni, attached to the A Department of the Police Division, Yenagoa, Bayelsa over alleged involvement in the mounting of road block and dispossessing road users of cash and valuables.

Bayelsa Police Commissioner, Mr. Tonye Ebitibituwa, in a statement, in Yenagoa, described the purported arrest of the police inspector by the military as a lie.

According to him, the refusal of the army to respect the information made available on the mental status of the arrested police officer was a clear threat to the synergy between the police and military.

The Bayelsa police, in the statement signed by the command spokesman, Mr. Alex Akhigbe, said the action of the army “is malicious and provocative.” The statement read in part: “The said inspector was never arrested by the military but rather he walked to their checkpoint and told them he was an armed robber.

“The inspector is a psychiatric patient who was posted to police medical unit by the retired Commissioner of Police, Kingsley Omire, to enable him have proper attention. He walked to the military check point without arms and no one was seen with him.”

The police command stated that though they were informed about the purported arrest of the sick inspector by his family members, the attempts by the police authorities to inform the military of the mental status of the man failed.

“A letter written by the Deputy Commissioner of Police, Bello Ahmed, to the military, through Inspector Aselemi Oyaghiri, for the release of the arrested inspector for proper medical attention failed,” according to the statement.