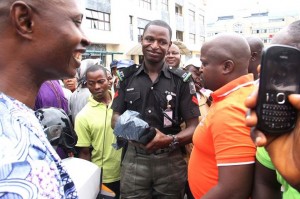 A Nigerian police officer in Abuja on Friday was hailed as a hero when he gave some fleeing robbers a hot chase on his power bike in a rare display of exemplary policing and recovered the money they had stolen from their victim.

The robbers, who rode on a lower engine motorbike, reportedly snatched a bag containing N150,000 from their victim as he walked out of a bank in the heart of Area 3 in the Federal Capital Territory.

The victim’s cry for help drew the attention of the police officer simply identified as Abu Tanko, a corporal attached to the Louis Edet House, Police Force Headquarters, Abuja as an outrider.

Mr. Tanko was said to have pursued the thieves as they made away on their own motorcycle with their loot but after some few kilometers and sensing the police officer was closing in on them, they dumped the bag around Area 8 and escaped.

The police officer picked it up, gave up his pursuit and returned to the scene of the crime 15 minutes to return the money intact to its owner, who was bewildered but full of thanks for the heroic efforts of the Mr. Tanko.

Already, a small crowd, who witnessed the incident, had gathered to witness the handover of the cash by the policeman, who instantly assumed stardom as his photographs was taken.

The reaction and honesty of Mr. Tanko is a reminder that not all policemen are as bad as the actions of a few rotten eggs among the force portray them to be.